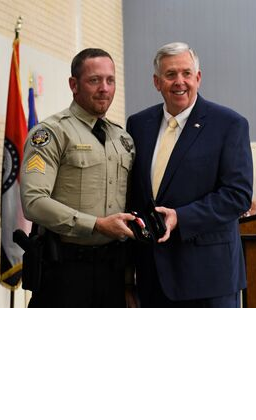 “On July 19, 2018, Sergeant Fields was off-duty and working security at the Showboat Branson Belle. At approximately 7 p.m., while Sergeant Fields was on an upper level entry platform, a severe storm with near-hurricane force winds quickly developed. Observing that a tourist duck boat was in trouble as it attempted to return to shore against the 70 mile per hour winds and heavy waves, Fields ran down a set of stairs and across the deck to the back of the showboat, positioning himself beside the paddle wheel. Sergeant Fields notified dispatch that the duck boat was sinking and that he was going into the water in a rescue attempt. Fields removed his duty gear and handed it to a Branson Belle employee. He then stripped down to his pants, grabbed a life jacket and, without concern for his own safety, dived into the turbulent water. Fields helped pull multiple people to safety and, unfortunately, removed several victims who did not survive the tragedy in which 17 people died. In the midst of a dangerous, unrelenting storm, Sergeant Fields took immediate and decisive action. Without specialized equipment, he bravely risked his own life by jumping into roiling Table Rock Lake to save lives.”

The Medal of Valor is Missouri's highest award, recognizing public safety officers who exhibit exceptional courage, extraordinary decisiveness, presence of mind, and unusual swiftness of action, regardless of his or her personal safety, in the attempt to save or protect human life.